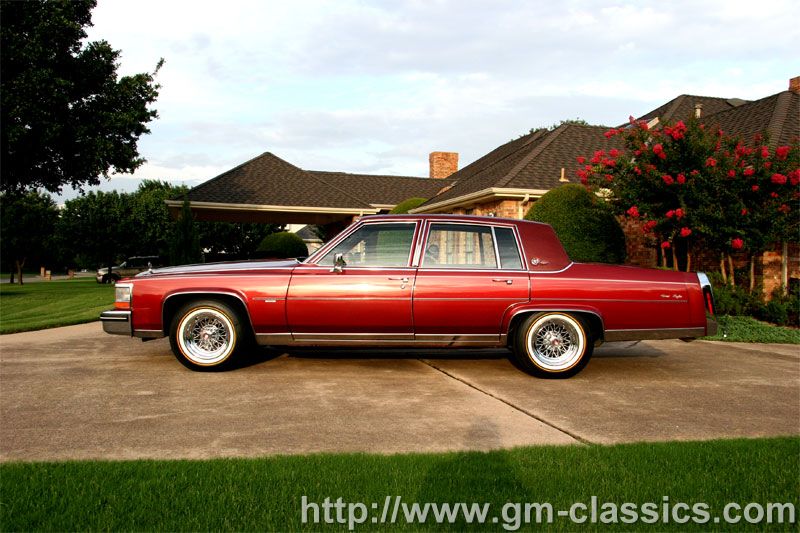 This is my 1980 Cadillac Fleetwood Brougham DeElegance.  Out of the 100's of cars and the 20+ I seem to own at any one given time, none have topped this car as my favorite.  The appreciation I have for a car like this comes with years of owning and working on more expensive, less expensive, better quality, lesser quality, faster and slower examples.  Out of all those cars, this is the car I always give 2 thumbs up on compared to all others.  It has looks, it has decent quality, it has excellent drivability, its not too big, its not too small, and the performance this car boasts is certainly unexpected by anyone that encounters it.  What is even better about these cars are today they have great resale.  These cars are tomorrows classics and investment cars.   Nice examples of cars like this are starting to get very expensive, not to mention hard to find.

As far as this car, it started life as pretty as it is now and has kept like that all its life.  The performance was added later.  This example has very low original miles and it was a good 10 year search to find a car like this.  It is as rare as any rare muscle car or exotic in its option make up.  The car has all options including the $1100 Factory Astro roof and Commercial Chassis option.  The paint is original and in as perfect of condition as you can get for 1980 quality.  The DeElegance optioned Leather interior is flawless. Optioned like this, and being a factory Big Block Cadillac car, with the fact it has the firemest paint, make it only a handful like this ever produced.  I collect many cars have owned this 80 for a while and even though it had the 6.0 Big Block Cadillac Engine, it was not a pleasure to drive for my taste in performance. I love the Fleetwood Cadillac as you can tell.  Since this car was such a perfect example in every manner with every box checked, I decided to make this car an example of the way Cadillac should have offered this car to begin with and an idea I had really planed since 1980, when I first worked on one of these cars.

Since this car has the factory Big Block, it made a perfect and easy transplant to the largest production engine ever... The Cadillac 500!  The 368, 425, 472 and 500 are all essentially the same engine.. Like Chevy 305, 350, 400, etc.  I decided to go with the most could get.  The 1970 Cadillac 500 CID 400HP Engine from the 70 Eldorado.  I contracted Al Betker at MTS (Maximum TorqueSpecialist) www.500cid.com to build a high compression version of the 400HP engine doing many mods that the company specializes in, thus giving me a near 500HP engine, at least at the flywheel.  Now the torque on the other hand is amazing at near 600FT LBS!  The engine has many tricks done to it to do this, but as a whole its very much a factory type engine, unlike a Chevy at this power level. So far this is the most powerful big block engine of its type I have had that idles good and does not have all the aftermarket temperamental BS that come with it.  I rebuilt the factory TH400 with a hardened second gear sprague, B&M kit and used a rare LS6 6 bolt  torque converter with a roughly 1800RPM Stall and 2000 Flash.  Since this car was a commercial chassis car, it has the best darn differential that you can get... The Cadillac 12 Bolt Posi. I regeared it to a 3:08 ratio, but that was a little steep with no OD and this big inch motor believe it or not, and dropped down to a 2:73 ratio. That is about perfect for this car.  I added a custom built 3" dual exhaust that is a piece of art built buy a good friend and best muffler shop on the planet... Joes Muffler in Addison.  The car is quiet but has a note of major power to it.  I also used a new 4 core radiator that was made for a late 70's 1 ton tow truck, added a 18x6 plate Oil cooler ant a 12x12 plate Trans cooler and a booster fan to keep this heavy hauler cool.

The wheels are a bit of a debate. Although they have a cool look and tend to get many complements from the "hip-hop" crowd, I would rather have the factory type wire.  But with wire wheels, these 15x8" Cragar Star Wire are the only Wire wheel that can stand up to the Torque this car produces, offers a good offset and 8" width.  The regular wire wheel would spin out in the center under the power this car makes.. Ask me how I know... So thus the story of the wheels.  To match the wheels, the tires.. Or Tyres in this instance, are the ultra wide Vogues built on a special core that are rated at 235 70 15's, but are more like a 275 60.  Here again, the only monster white wall I could get and these cars look like hell with black wall tires.  The suspension on the commercial chassis was pretty decent and has major bracing and things not offered on a regular car.  This also make the car a bit heavier weighing a little over the 4000LB mark, as with 3900 on the regular car.  The added structure makes this brougham the single most ridged GM 4 door car I have ever been in.  I went ahead and put Caprice 9C1 springs in the front, although I did not see much difference, and kept the HD rears the same.  I used an ADDCO 1 1/2" front sway bar and put the massive rear aftermarket, factory copy, that many use on the Impala SS upgrades.  I used KYB shocks in the front and new GM Tow Pak Air  shocks in the back to keep the factory level system in tack, as you really need it in these cars to keep the proper height with people and gas in it.  The car, even with its tall tires, handles very impressive for what it is, simply does not lean, bounce or slop, but I would not put it up against a corvette in handling. Now in 1/4 mile acceleration... Bring it on...

As of 10/2003 this was a new project for me.  I have not got an official time or dyno on the car yet and am still dialing in the car a bit. I do have a cheap Gtech and yes this is a 12:92 at 106 car right now on it. It does it almost every time without having to burn out or rev up past 5000.  I have lined up against LS1 this that and the other, only to run them all down till about 110MPH against the fastest of the gang.  I even ran the car against my own personal ZR1.  The Cadillac left the ZR1 until about 60 and the ZR1 pulled a few on it slowly.  The ZR1 is however a legitimate low 12 second car. This Cadillac is THE MOST fun I have ever had with a car in my near 30 years of modding and collecting cars.  It is mind blowing when you race someone that expects to humor you and you put 3-4 bus lengths on cars like 350Z's and run right with most LS1 type cars and beat just about everything else! The best part is that you are doing it in a classy looking car that everyone thinks has no business doing what it does. To top it off, the car will get about 12MPG of you don’t beat the tar out of it.  Still better than my suburban and with the near acceleration of an exotic ZR1 corvette! 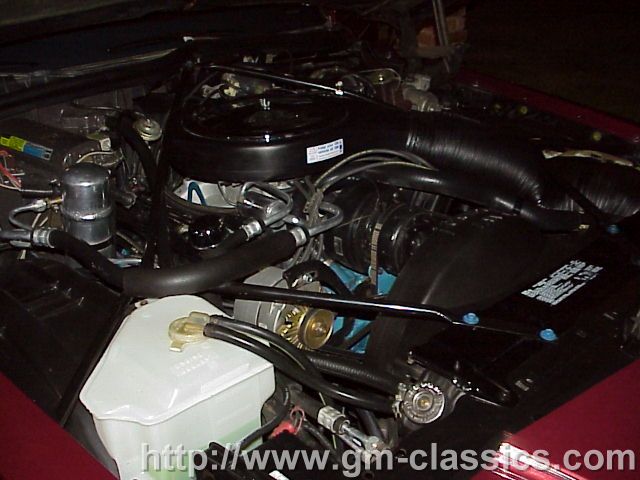 The 500CID power plant!  Air Cleaner is a custom cold air unit made by AIS out of Canada. www.ramairbox.com     It has a 6" duct.. Massive!  but yet a somewhat orginal look to it.  The rest of the equip is right as the factory made it. AC, Cruise, Gas Tank Evaporitive Controls and even dummied up AIR pump. 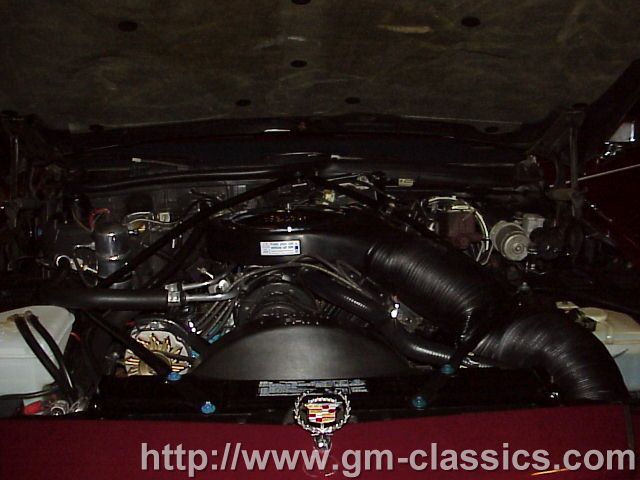 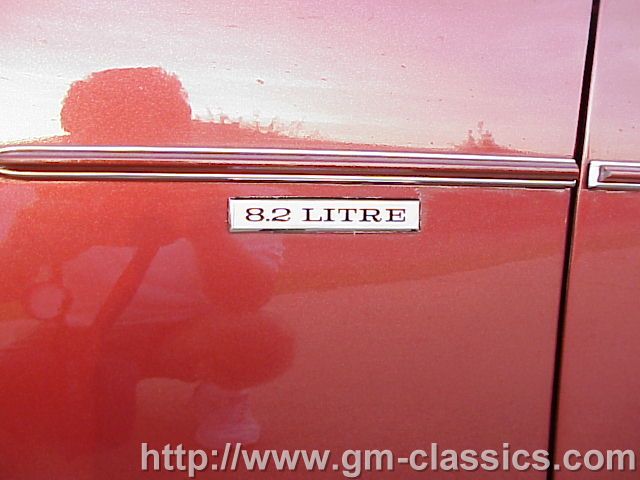 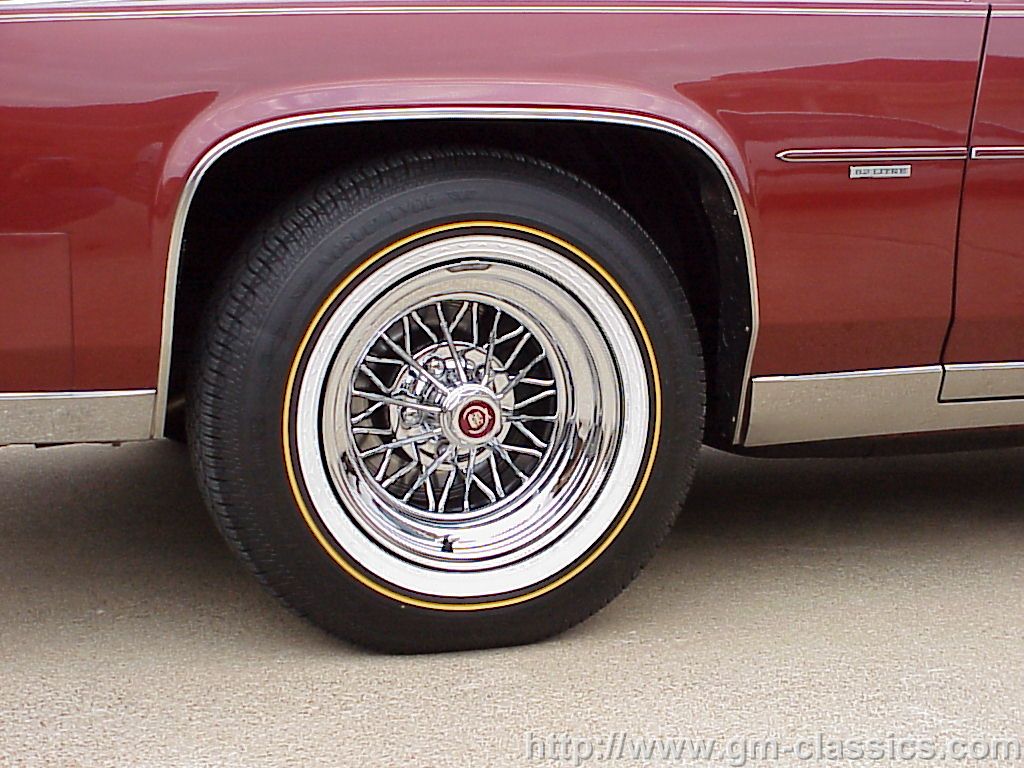 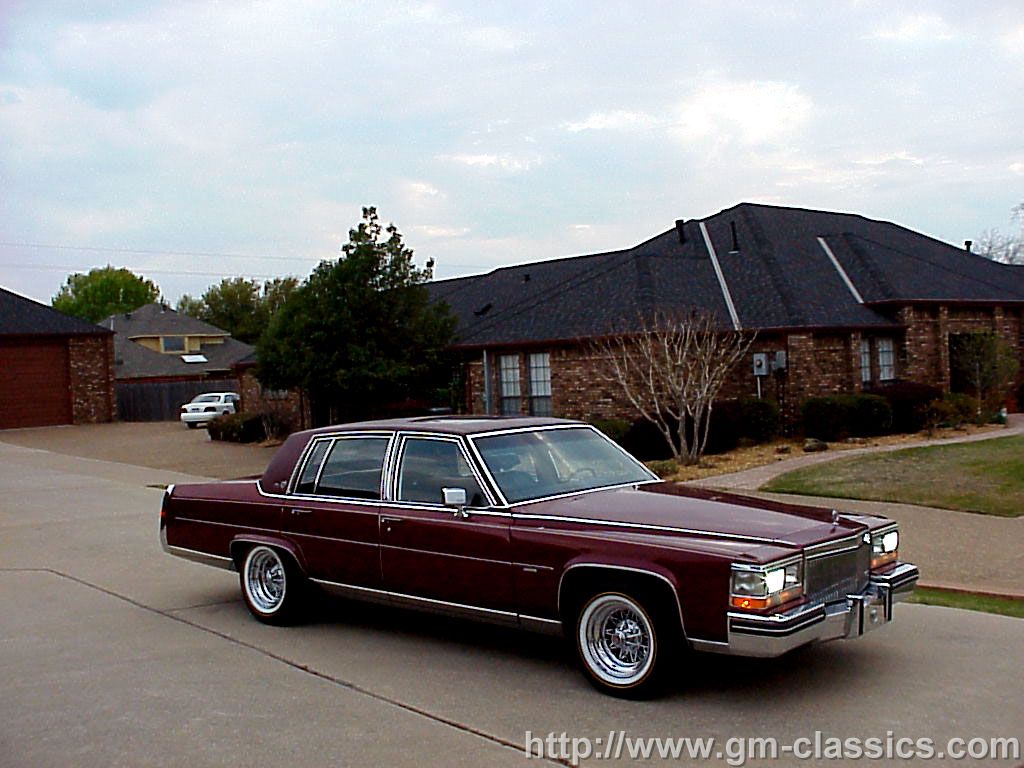 Side Shot.. See the RARE factory Astro Roof... The collectors just go nuts over these things... 1/2 the value of the car in actuality. 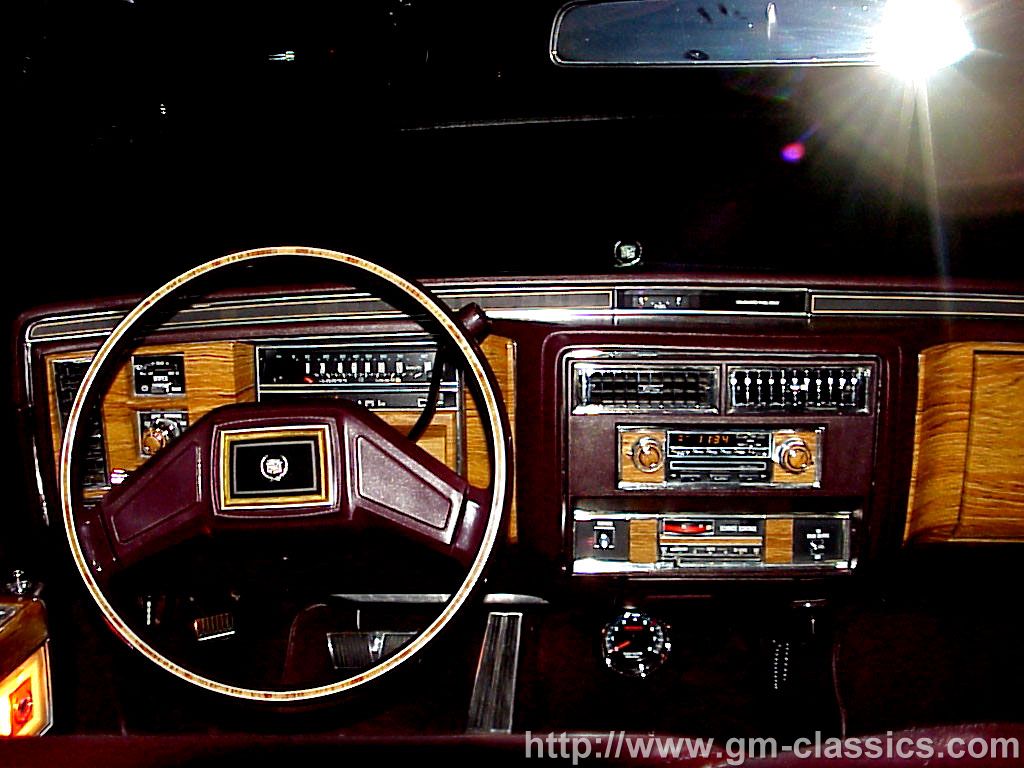 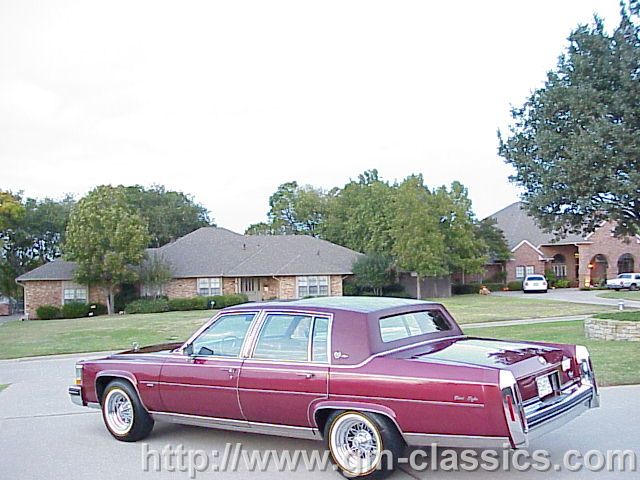 Side Shot.. Note the perfect factory original fillers!  I give them a few more years before they become like the rest.  You cant stop these things from falling apart even keeping the car where I do.  Not looking forward to matching the paint for this to replace them. 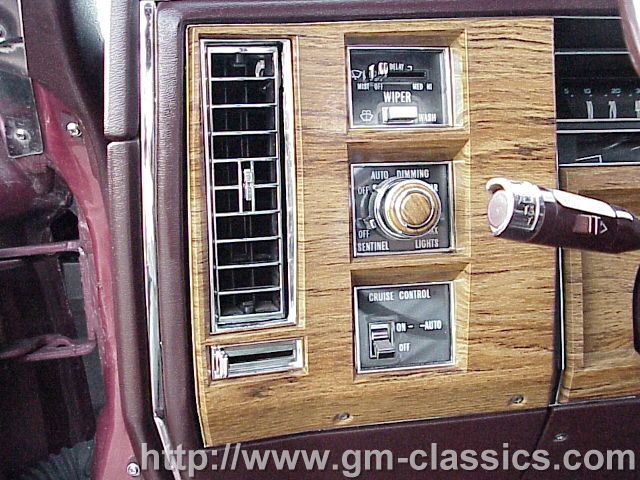 Yep.. Got it all.. The plastic-chrome is pretty amazing too.  That stuff is like watercolor.... 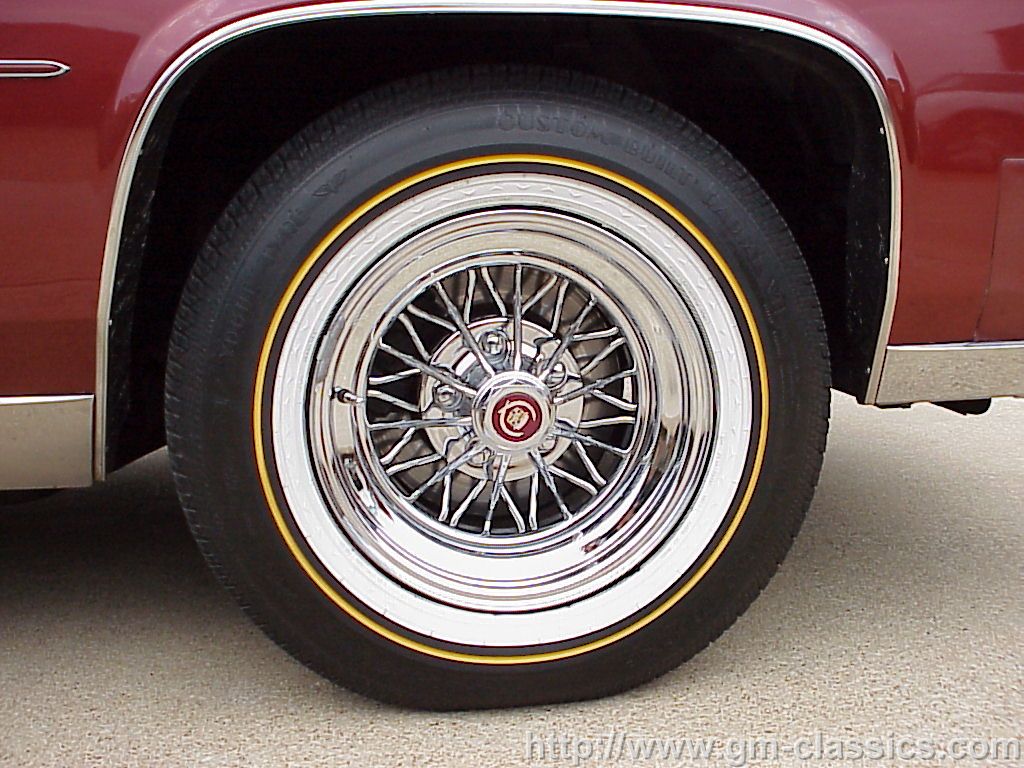 Massive Cragar 15x8 Star wire...  Custom Center Cap Built by Me.  Again the only wire wheel that will stand up to hot-rodding, thus the reason being on the car.  Actually a very well built, but extremely heavy wheel.  Closest to factory looking with strength I could get. 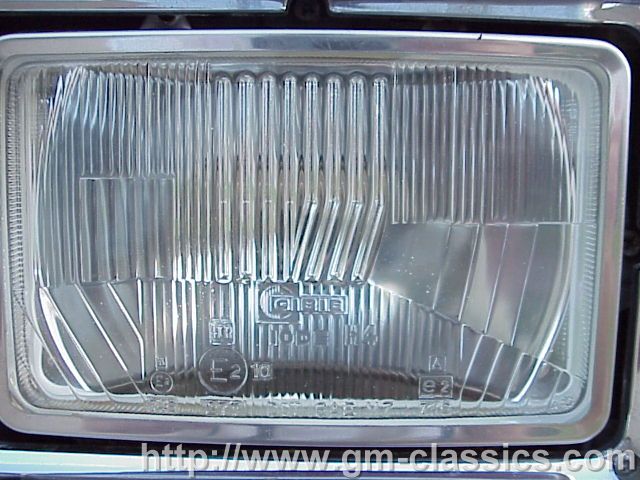 Good Lights too!  Real HID's!  Yes, that is right. 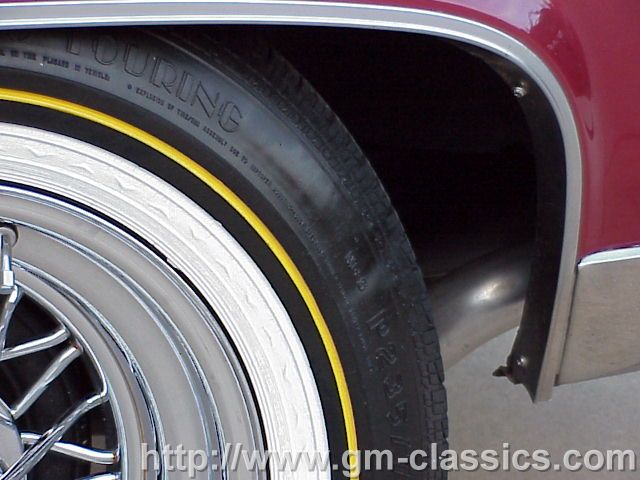 Note the quality of the exhaust.  Has dual 3" with two magnaflow 18" mufflers and two magnaflow resonators.  Copied the style of the 96 Brougham but with much larger. 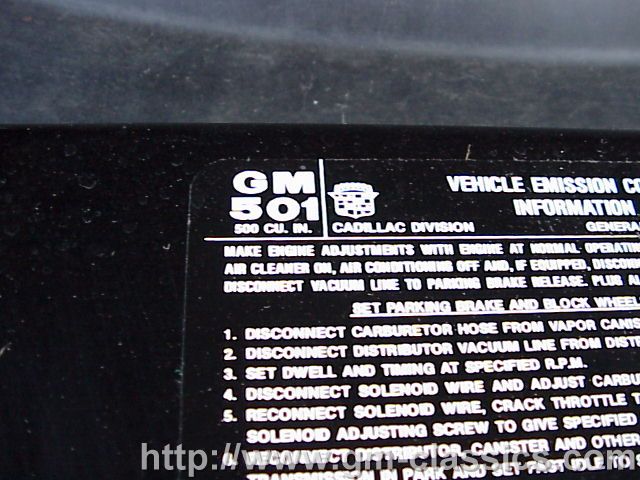 To top it off, an original GM 501 Emissions Sticker... Yes its all original!  I swear! 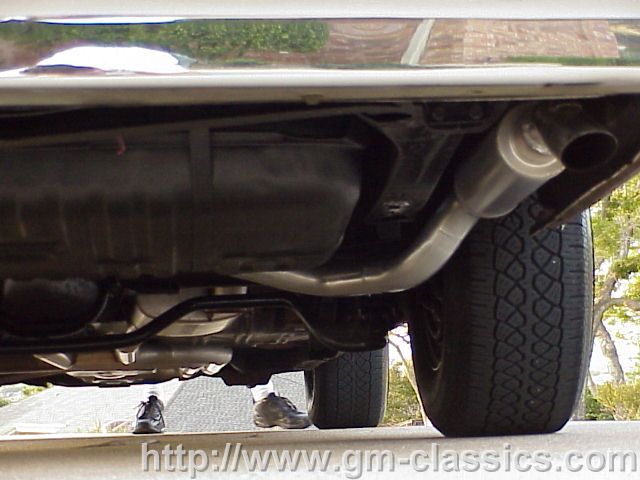 More Exhaust Shots!  Joe is an Artist... If you are in Dallas, call this guy!  Joes Muffler in Addisson!  Also note the "Use Limited Slip Oil Only" tag on the diff.  I did not even have to add it, but changed the gears... Its a factory limo posi! 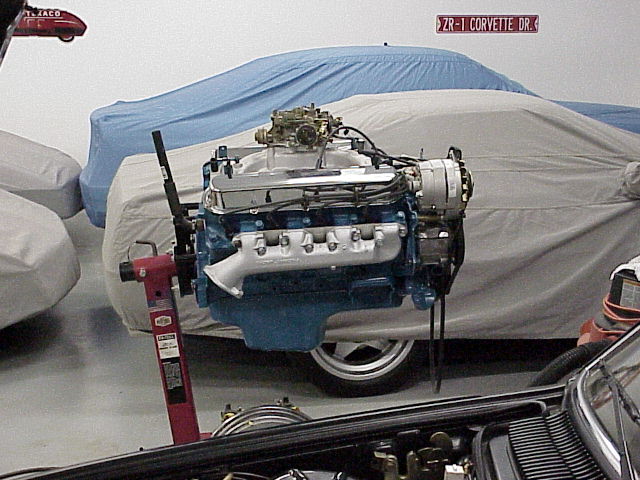