From 1990 to 1995 GM/Chevrolet produced the end result of one of the most radical projects ever done by the very conservative company.  The LT5 ZR1 32V Dohc "King of the Hill" Corvette!  The total number of cars from 1990-1995 were only 6939 for all the years combined, making all of them quite a rare piece of machinery.  The sticker on these cars were right about $70,000 USD and went up a bit as the years went on, making it affordable to only a few.  From 1990-1995, the cars were built pretty much the same, but had a couple of small changes over the years.  The biggest was from the 1990 car to the 1991-1995 cars.  1990 was the only car to have the old style front end. The 1991 and newer shared much of the same look as the regular corvette...  Although the ZR1 looked absolutely incredible, this was probably not a good thing as it is hard for the average person to tell the difference between the 1991 and newer ZR1 cars VS the regular corvette.  This could have also helped fuel the lower sales on the car too, but the tell tale sign of a ZR1 is its extreme width in the back.  You cant miss it!  It is 4" wider that a regular corvette and uses the massive 315/35/17 tires on 11" wide wheels.

What is not seen on a ZR1 is what is under the hood.   The LT5 is an all aluminum 349CID/5.7 Liter 32 Valve piece of engineering that has yet to be matched anywhere on earth.  The motors are right at 400HP with a near 7000RPM red line, but have more reliability and endurance over any high performance engine ever produced in this country to date.  The ZR1 is known for its top speed endurance record, where the car went at speeds over 175MPH, non stop, for 24 hours.  There are NO American cars that can do this except the ZR1 to date!  The ZR1 truly is a race car on the street and has the endurance to go from coast to coast as fast as possible without breaking, if there were no speed limits.  The LT5 was so radical, that GM could not even produce it their selves.  It was partially designed by Lotus, but was actually hand build by the Mercury Marine Company in Stillwater Oklahoma... A totally off the wall move by GM, never again done.  Though the motor has not been produced again due to its unheard of actual cost to GM, the research behind it was used in other revolutionary engines, such as the Northstar Cadillac Engine.  A high HP version of the Northstar is rumored to power the Corvette one day with even more power than the LT5. It probably will not have the reliability though.

The ZR1 also has some very interesting hardware.  There is an oil cooling system that is larger than most cars entire cooling system.  The car has a special version of the German built ZF 6 speed transmission, another radical move on GM.  The car has a self adjusting suspension, known as the "FX3", and even more.  Although there were just a couple of minor variances, in a nutshell, all ZR1s came fully loaded, all the same way with the best of everything... Just pick the color....

Personally, the ZR1 is the best performance car I have ever had the privilege of owning.  I have had many ZR1s and currently have 2 in my collection.  The black one pictured here has about 18,000 miles and a few minor bolt on mods.  My white one is new, with less than 1000 miles, and is a collector.  As I said, I have many cars and collect them. Some of my cars are quite a bit faster than my ZR1... Like my Callaway Twin Turbo Corvettes... But I prefer the ZR1 over all of these cars as the best overall performance car.... What the ZR1 offers over any car I have encountered is its near indestructibility, packaged with a great driving car that is very rare and collectable.  When you get used to driving a ZR1, you will literally break other cars you get into after it.   The ZR1 will run a high 12 quarter mile, and every ZR1 produced is capable of going over 185MPH..... RELIABLY........  This is why I love the ZR1 and hold it #1 in my book as the best overall performance car ever produced!

The Black car in these pictures has a few upgrades done to it.  The first is the Mega Rare and super expensive Dymag Magnesium Wheels.  The Dymag wheels were use on the Twin Turbo Callaways, but a handful were made for the ZR1, with the wider wheel in the rear.  These wheels are so rare, that the value of the Dymags are a good percentage of the total cars value.  The original wheels/tires are plastic bagged and stored.  The next is the Exhaust.  The car has a rare Desert Development exhaust system.  These were known as some of the most HP adding exhaust you could get for a ZR1.  I had some nicer tips put in it and a good portion of it rebuilt do to its poor quality, as with most big name aftermarket exhausts, but it is nice, sounds good and adds some good power.  The car has some upgrade brakes... These are just newer factory brakes with the "corvette" name in them, just cosmetic... The ZR1 brakes are pretty good as they are.  The car also has some 4:10 gears, replacing the stock and near perfect 3:45s they come with.  This adds a bit to the acceleration on these cars in a 1/4 mile contest, and with these basic mods, this ZR1 is a low 12 car in the 114-116MPH range in a 1/4 mile, but has also hit a top speed of 183 on a GPS verified run, and could do this all day long without a hickup.  The car dynos right at 360HP to the ground, and the motor is unaltered in the slightest form. This black car has one of the very few options that were actually different on ZR1s, but this is only a 1990 thing... It has the manual control AC system.  Only 124 ZR1 are know to get this, and the digital was all that was available after 1990.... Nothing big, but sort of a rare thing...  This car has also had the honor of being signed by Dave McLellan, who was the chief engineer of GM after Zora Duntov, and was credited for the ZR1 being produced.  This car was signed by its father, so to speak.

With all this being said.... If you are a car enthusiast and have a taste for performance, packaged with a great looking and driving car that is one of the few late model collectable cars... This is the car to have....  If you buy one and don't drive it much, a ZR1 is as good as money in the bank... This is tough to say on ANY car, but the ZR1 is this.  Personally owning 17 cars as of this write up,  I am often asked which car is my favorite.... I just say this........If I had to get rid of all of them but was given the chance to keep only one... I would keep a ZR1, everything else is second to it.... This is a true testament to the ZR1!

The LT5, Signed by Dave McClelland

Desert Development Exhaust, but built with higher grade pipe than the "others'

Other ZR1 below, New, no miles window sticker on car. 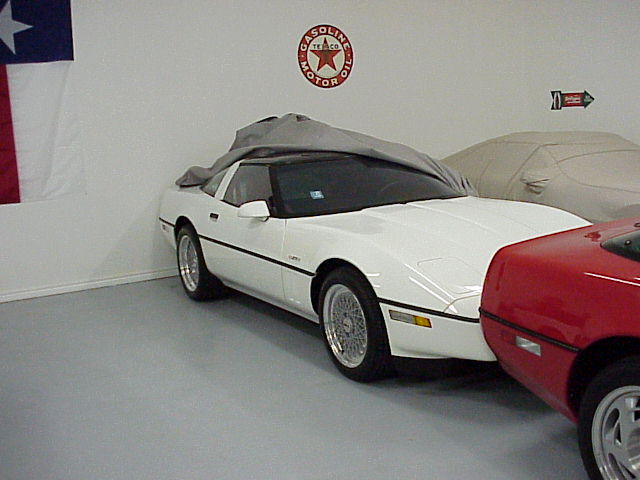 Below Image - "Ghost of a Street Racer" - Matt Garrett